Our country faces a daily crisis of gun violence and mass incarceration. The loss of life will remain an imminent threat unless communities come together to speak out about the injustice. We are compelled by our faith to proclaim that the value of life among our young men has greatly been diminished. And people of faith have something to say about it! We are calling on everyone across the country to PREACH, PRAY and ACT to heal our nation. JFB Promise Inc./ Project Felons will be hosting an informational session this campaign. Ms. Dornita Rogers will be our guest presenter. Come out and learn more about this campaign and how it will benefit our community.

To RSVP
Posted by Project Felons at 2:05 PM No comments:

The Parent Support for Education Council, Inc. (PSFEC)
A Ministry


Board of Directors in May 2010, adopted
The Fourth Sunday in July as
National Parents’ Day


History and Highlights
On October 14, 1994, President Bill Clinton signed into law the resolution unanimously adopted by the U.S. Congress that established the fourth Sunday of every July as Parents’ Day.
Religious, political and civic leaders recognized that America’s Families were in crisis and that there was an urgent need to promote positive parenting in our society. In the early 90’s, numerous studies documented that dysfunctional parenting and family breakup directly caused most of America’s social ills.


The PSFEC is working with parents, churches and the community to address these serious societal issues. 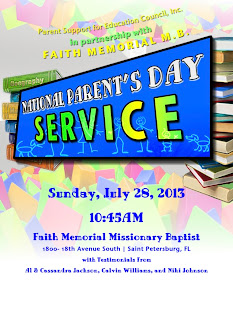 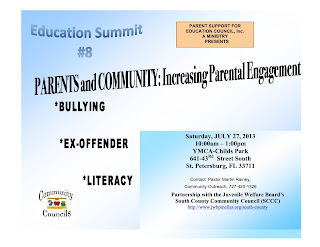 Please join in at the Education Summit #8 and our 3rd annual NATIONAL PARENTS DAY service July 27 and 28, 2013, A weekend  commemoration “for recognizing, uplifting, and supporting the role of the parent and community in the helping our children succeed.

Posted by Project Felons at 7:34 AM No comments:

As we continue to grieve Trayvon and contemplate ways to prevent future Trayvons.  I humbly ask you read my latest oped.  We need to ask more questions, and get more answers.  Remember that it is not about the verdict, it’s about our values.
Link To Article
Posted by Project Felons at 7:29 AM No comments:

Out of Prison, Megan Winfrey Wants a Normal Life

Posted by Project Felons at 6:16 AM No comments:

Posted by Project Felons at 6:09 AM No comments: